As many of you know who follow my channel, I’ve recently picked up an old 1st generation Ryonet RXP Exposure Unit from the good folks at Zen Threads in Sacramento.

While this unit would not be my “first choice” for a brand new exposure unit, it was a reasonable deal and still in fairly good shape overall so it’ll do just fine until I can officially build my custom UV LED unit.

The old analogue timer is unreliable so were going to be replacing it with a digital version to make exposures easier and more accurate.

After a good deal of research, we discovered a timer that does not require a “common wire” since its timer function relies on a battery instead, making it the perfect solution for upgrading the timer in this old unit. 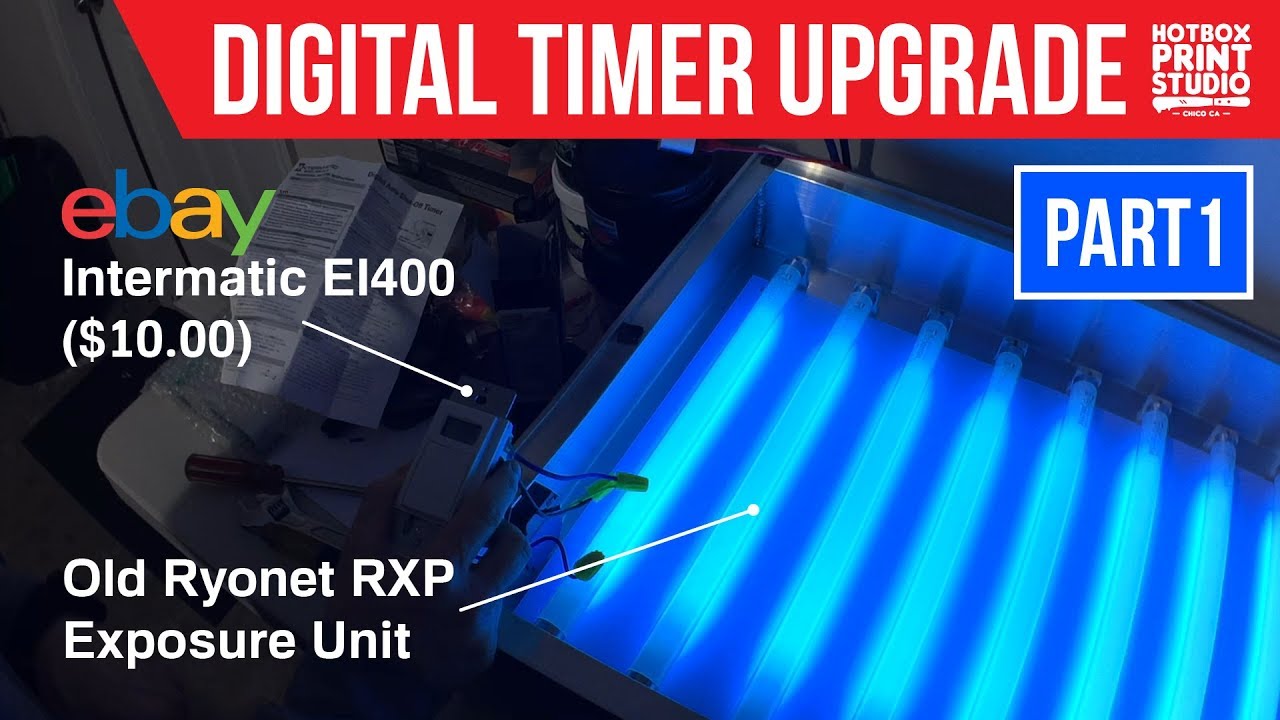 In this video, you’ll see how i managed to retrofit the new digital timer where the old analogue one was.

Parts List:
• 1st Generation Ryonet RXP Exposure Unit
• Intermatic EI400 Digital Shut-off Timer
• Hammer
• Center Punch (for making a dimple in the metal before drilling)
• Phillips Head Screwdriver
• Variable speed hand-drill
• 7/64 Titanium Coated Drill Bit (ignore my rambling in the video about this part, this is what you need)
• Some form of oil or lubricant for drilling metal (I used some old Bones skateboard bearing oil since its what I had laying around and it did the job just fine)
• Protective eyewear and gloves
• #6 x 3/4 in Sheet Metal Screws (pan head phillips)
• 1 “rocker” style wall plate (buy the “unbreakable nylon” kind instead of the traditional plastic, unless you want to crack it like I did when I first installed mine! lol)
• 1 pack of Yellow Wire Nuts/Connectors
• 1 small pack of Yellow Stud Ring Terminals (for the ground wire) 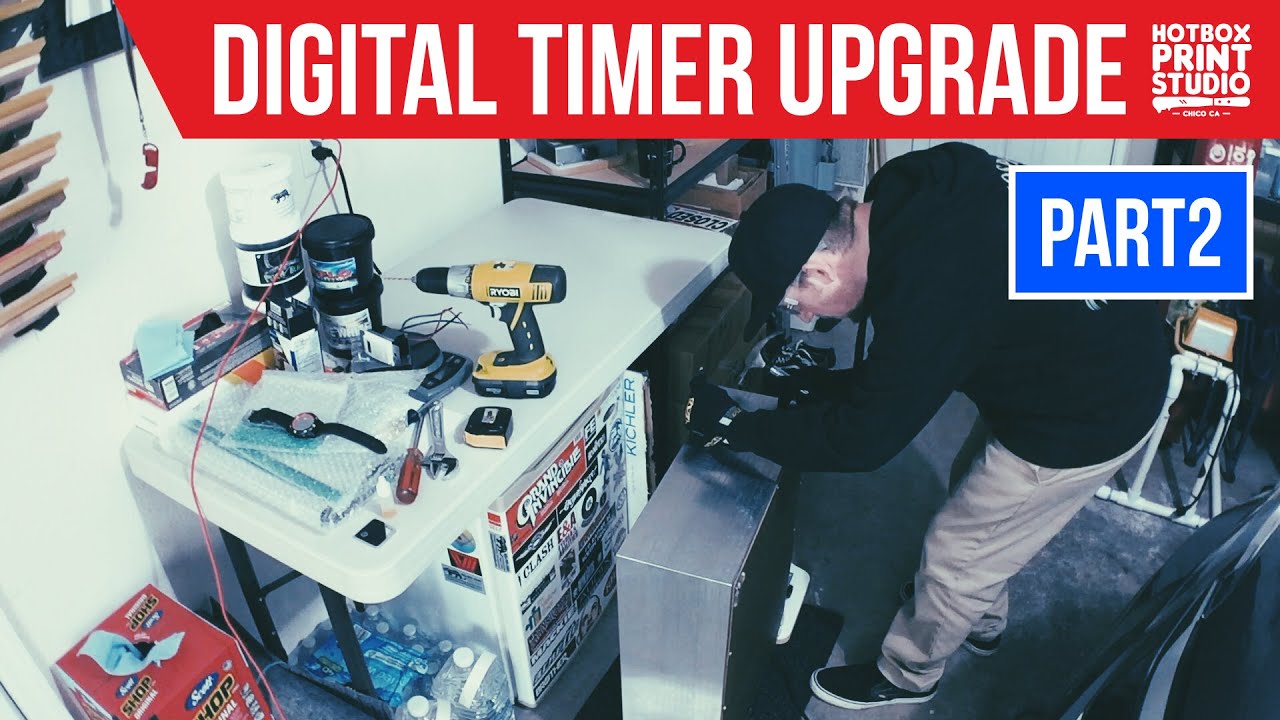 Side Note: You could technically just use “tapping screws” instead of sheet metal screws and skip the step where I pilot the holes first – however, you risk sacrificing accuracy for your screw locations possibly by doing so…. that part is up to you.

I hope documenting my DIY project may help some of you – thanks for watching!
Best, Shaun 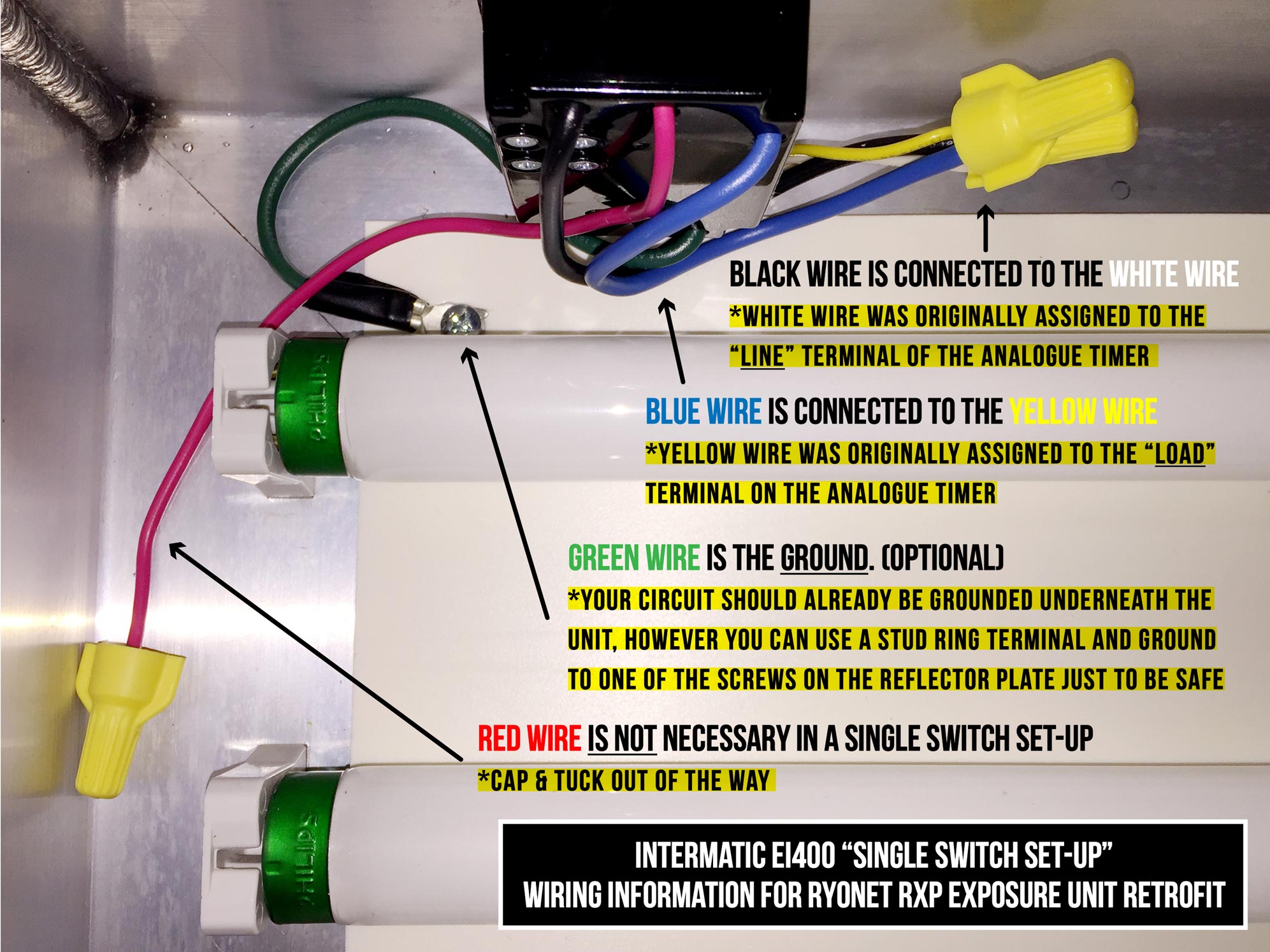 Disclaimer: I am not a paid affiliate for Bulb Connection, nor did I receive my products for free in exchange for positive reviews, etc. – I simply enjoy helping other printers when I can, and IMHO Bulb Connection is your best option for finding quality name brand replacement bulbs at a reasonable cost.

Looking for the best deal on replacement bulbs for your exposure unit?

Replacement UV bulbs for exposure units are commonly sold at most reputable screen print suppliers, however you should know that you are not restricted to purchasing your bulbs from a supplier. This is not a knock to any local supplier, but there really is no reason that you should be paying almost equal amounts of money for replacement bulbs as you would for the exposure unit itself so I highly suggest that you look around online first and not simply default to buying directly from your supplier… unless of course they have a great deal, in that case go for it! …but the odds are they probably don’t.

My old Ryonet RXP Exposure Unit utilizes 8x 15w UV Actinic Blacklight Bulbs.
I found a killer deal on the “master” version of these bulbs for a fraction of the cost that suppliers were attempting to sell them for from a small online store called Bulb Connection located in West Des Moines, Iowa. The online store may not instill a ton of buyer confidence, however checkout is encrypted and if you need assistance you will be contacted by a customer service rep almost immediately so I really cant say enough good things about these folks. Best prices hands down, fast shipping, and the bulbs arrived well-packed and in perfect shape.